Picking the best squash racket for beginners is challenging – at the beginning, you know very little about rackets, and you don’t yet have your personal racket preferences. I listed 11 squash rackets with head size, weight, balance and string pattern suitable for beginners.

Our first recommendation for beginners is the Python racquetball starter kit. With an open string pattern, a large head (77 square inches) that is easy to hit with – It’s a very decent racket for squash beginners.

Before moving on to our reviews, let’s briefly overview the key features to look for in the best squash racket for beginners.

Head size: Large racket heads tend to have larger sweet spots, requiring less accuracy from you. For a beginner, a larger head would probably be better since it would be easier to hit with.

Weight: Unless you already know you have a powerful swing, the best squash racket for beginners would be a heavier one.

Balance: When it comes to weight distribution, squash rackets can be either head-heavy with more weight towards the head or head-light which makes them more controllable.

Material: Graphite composite is widely considered the best material for squash rackets. But rackets are also made of Basaltex and Titanium combinations.

11 Best Squash Rackets For Beginners in 2022 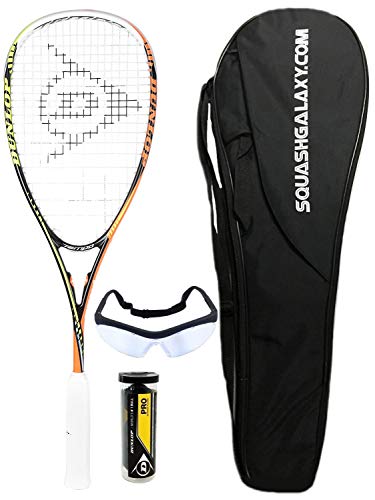 The Python Racquetball Deluxe Squash Starter Kit comes with various items to help newbies get started, earning the title of one of the best squash rackets for the money.

Out of all the included, Python is a pretty interesting one. Weighing 165 grams, it’s oriented at power but has hints of control. It also has a large 77 sq. in. racket head, which should make it easier for you to hit the ball.

This Python Squash Kit is overall praised for the value delivered, but the racket received a few complaints on its quality and durability. Still, given the price, it’s a very decent buy, and thanks to its heft, it’s one of the best squash rackets for power at its price point. Read more reviews. 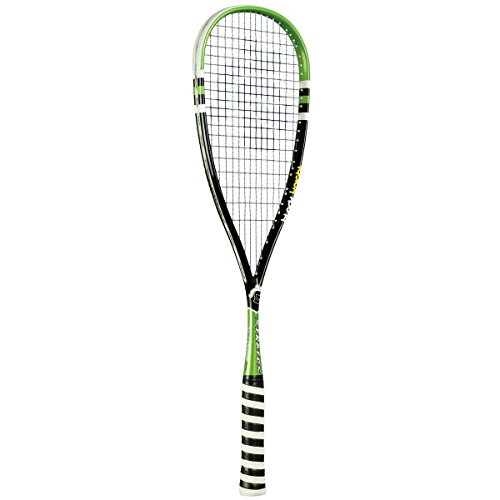 The Stratos squash racket from Black Knight is a different kind of beast. It has an overall lighter feel, but thanks to its more open string pattern and head-heavy balance, Stratos stays quite a heavy hitter. At the same time, its smaller 73 square inch head should make it more maneuverable, though it also will reduce the size of the sweet spot.

And even though this racket is pretty inexpensive, it has received praise for its lightness and a good balance of power and control. Read more reviews. 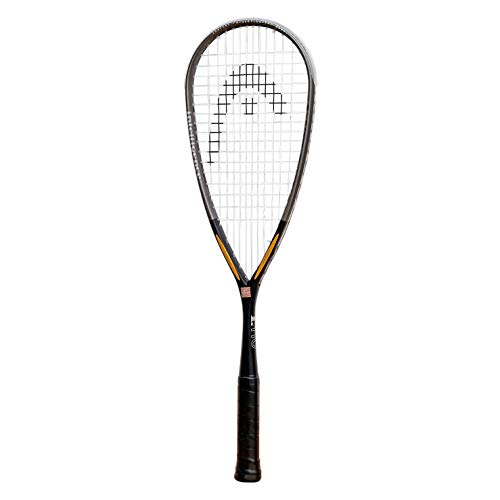 The HEAD i110 squash racket is remarkable in that it only weighs 110 grams, offering excellent control. The slight head-heavy balance, the stiffer frame, and the very open string pattern will somewhat increase the power of this thing a bit, but it will still remain a light hitter. As such, we’d recommend it to buyers who have a strong swing.

Of course, this racket won’t work for everybody – for example, one buyer was complaining about its lack of power. Well, that’s expectable from its weight. However, HEAD i110 squash racket has a fan-shaped stringing pattern that gives a player a little more power on their shots. In general, most people were praising its great control, and you may like it as well. Read more reviews.

The SquashGalaxy Intro 5000 racket won’t deliver a lot of control to you, but with its heavyweight and great power, it should compensate for lack of swing strength in newbies. Its large 77.5 sq. in. head should also make hitting the ball easier. 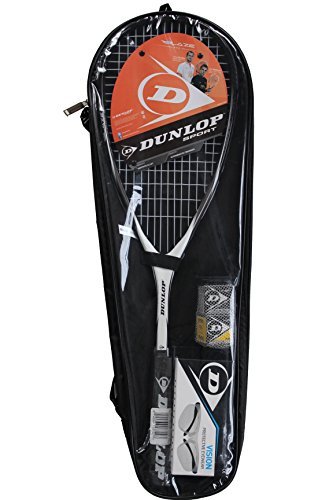 With its weight of 176 grams, The DUNLOP Blaze Pro racket included in this pack is yet another good option for newbies. Though it is head-light, its weight, open string pattern, and the large racket head should make it better for power.

What people especially liked about this racket is the value for the price, which makes Blaze Pro one of the best squash rackets for the money for beginners. Read more reviews. 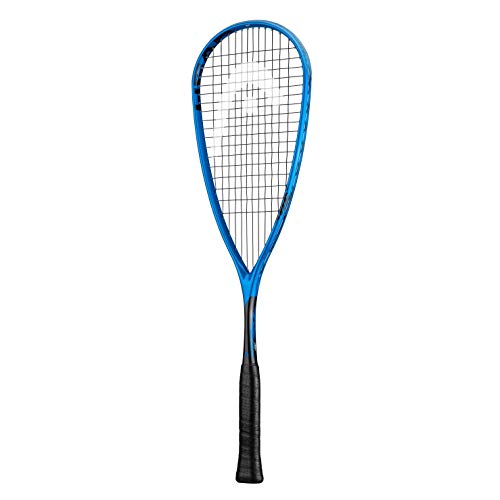 Feature a composite build, the HEAD Extreme seems a pretty durable squash racket. Its frame promises to be not only durable but also shock-absorbing, allowing for decreased vibration, increased stability, and reduced impact on the joints.

Performance-wise, Extreme is a controllable racket with hints of power delivered by its head-heavy build, large head, and the open string pattern. People seem to like the feel of this racket very much, though it’s certainly not for the weak hitter. Read more reviews. 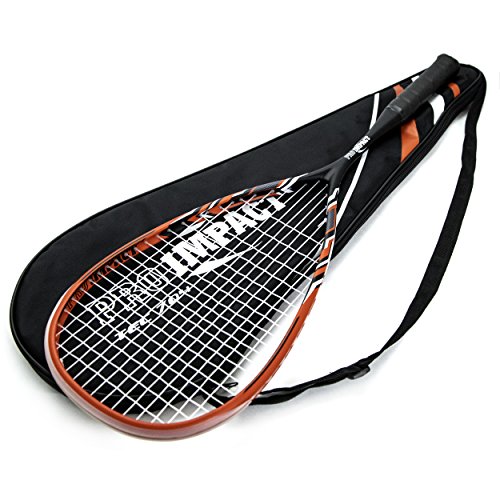 Boasting graphite – arguably the best material for squash rackets – Pro Impact is a very durable squash racket. At the same time, weighing just 150 grams, it’s not too heavy, although it’s certainly power-oriented. The head-light balance should make it a bit more controllable.

As for buyer feedback, the Pro Impact squash racket has received praise for its balanced feel and quality build. Read more reviews. 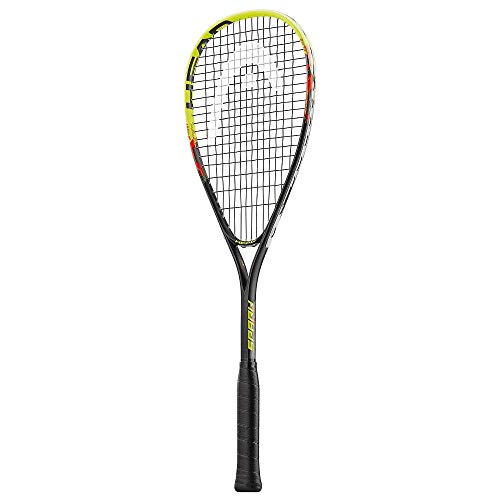 Thanks to its inexpensiveness, HEAD Spark Elite is a worthy contender for the title of the best squash racket for beginners. In fact, it’s a great choice for those who have a weak swing – its 190 grams of heft will deliver a lot of power, while the stable frame, head-light build, and dense-ish string pattern will allow for decent control.

Notably, Spark Elite seems to have received better appraisal from buyers than other rackets at its price, so it’s definitely a solid option to consider. Read more reviews. 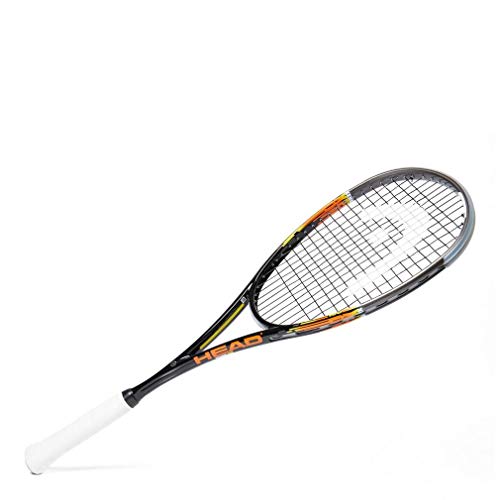 HEAD Xenon 135 delivers what is known as controlled power. The racket’s weight is typical of a more controllable racket, but its head-heavy design and open spring pattern may shift its performance a little more towards power. The result is solid control with hints of power.

Overall praised for its feel and build, Xenon 135 has a relatively small racket head, so it will be more demanding on your accuracy. Read more reviews. 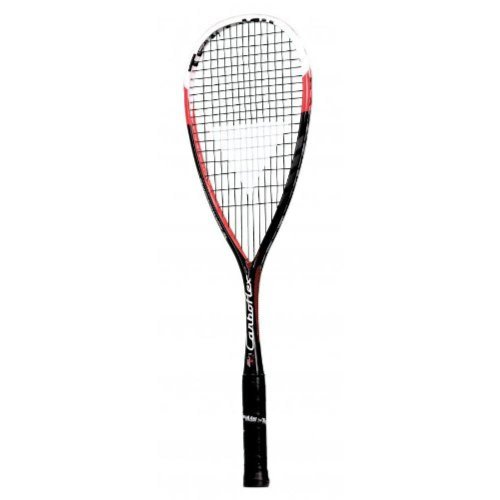 The Carboflex squash racket by Tecnifibre is leaning towards power – it weighs 140 grams (lighter variants available), has an open string pattern, and a large head that is easy to hit with. The heavier options should be better for beginners, while the lighter ones would be better if you want increased comfort.

Intermediate/expert players will especially appreciate Tecnifibre Carboflex because of its ample head weight. However, it is an excellent squash racket for beginners which can upgrade their abilities to an advanced level.

With Carboflex, you can hit overhead shots and swap sides easily as long as you are agile. In addition, because of the thick string arrangement, you will be able to hit the ball with more precision and power.

Carboflex has been very highly praised by buyers – with over 200 reviews and 4.5 stars on Amazon, it’s the highest-rated racket on our list and as such is a good option if you are looking for the best squash racket for intermediate players. Read more reviews. 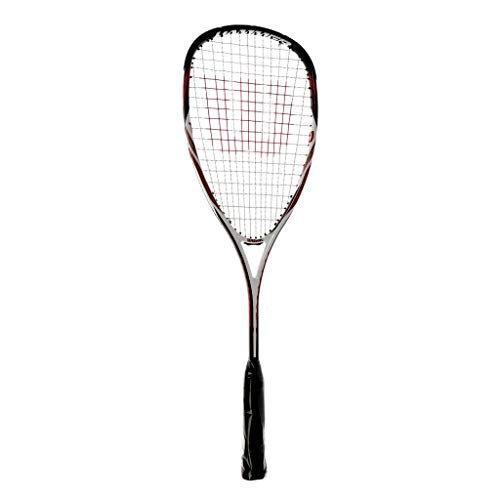 And the final contender for the title of the best squash racket for beginners is Wilson Hammer Tech Pro.

As you might have guessed from the name of this racket, this racket hits hard thanks to its weight, open string pattern, and head-heavy balance.

In terms of performance, this racket shouldn’t be too off from the Tecnifibre Carboflex racket, but its build quality won’t be as good. With that said, Hammer Tech Pro offers great value for the money, and its build and feel have been highly praised by buyers. Read more reviews.

Which Squash Racket For Beginners To Choose?

So which option would be the best squash racket for beginners? Well:

Things To Look For In The Best Squash Racket For Beginners

Key features to look for in the best squash racket for beginners:

Measured in square inches or square centimeters, head size essentially is the area of the racket head. The larger the head, the more power and the less control you will have, and vice versa. Aside from that, large racket heads tend to have larger sweet spots, requiring less accuracy from you. For a newbie, a larger head would probably be better since it would be easier to hit with.

Unless you know you have a powerful swing, the best squash racket for beginners would be a heavier one. Keep in mind that squash racket manufacturers typically indicate the weight of the racket when unstrung.

When it comes to weight distribution, squash rackets can be:

Head-light: In these rackets, the weight is towards the handle, which makes head-light rackets more controllable.

Head-heavy: With most of their weight towards the head, head-heavy rackets lack control but have better power. Some squash racket manufacturers indicate the balance point of their rackets in millimeters, measured from the bottom of the handle. If the balance point is in the handle, then the racket is head-light – otherwise, it’s head-heavy.

Graphite composite is widely considered the best material for squash rackets. It’s very durable and not too heavy, but graphite rackets are also pretty pricey. Cheaper rackets are typically built from aluminum. Aluminum is decently durable, but it tends to be heavy.

Other Important Squash Equipment To Consider

Aside from a squash racket, strongly consider also getting the following pieces of squash equipment:

The first thing to get is good squash balls, but don’t ignore the importance of squash attire as well. If you focus all your effort on getting the best squash racket for beginners, you won’t be at your best on the court.

Since squash rackets for beginners are essential equipment in the game of squash, you have to make sure you know what to look for when making your purchase. Based on this article, the best squash racket for beginners is Python Racquetball Deluxe Squash Starter Kit. This is mainly because it provides the best levels of both power and performance for beginner players.

However, since you probably don’t know much about your style and capabilities, you may want to go for a heavier racket to compensate for the lack of swing power. If you aren’t a complete newbie, then you may give rackets like Tecnifibre Carboflex 140 Basaltex a try – more advanced rackets can be great for newbies and stay great as you become better at the game.

Hopefully, you’ve been able to find that best squash racket for beginners!